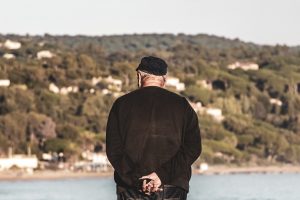 Stress can come from grief that has not been fully resolved, even though the loss may have occurred in the distant past.  Learning about grief can stimulate memories and that may have happened as you have read these notes.

Here are two stories of people who unexpectedly made significant progress in their journey of grief.  Read them and then reflect on your own experiences.

Lydia felt compelled to book an appointment to see her doctor, Dr Mark.  She had not seen him for a year since her husband, Neil, had died.  She had not wanted to see him ever again – but now she did.  He had said to contact her at any time, and he had been very caring and supportive during her husband’s final illness.  He was easy to talk to and everyone said how professional he was.  She had to agree he had made a very difficult time manageable, though it did not feel like that at the time.  Today was different.  Today she had to see him.  Dr Mark greeted her warmly without any hint of surprise or upset.  She relaxed a little for she thought he might be angry with her as she had been seeing a new young doctor in the practice for her own health checks.  He smiled and said, ‘How can I help?’  She promptly burst into tears.  He waited after giving her tissues.  It seemed ages.  He patted her arm.  ‘I am sorry,’ she said, ‘I wanted to thank you for looking after Neil.  I couldn’t come earlier.  I was too upset and angry.’  The doctor nodded, ‘I understand.  I was too close to all that happened with Neil.  I guess you were wondering in your heart of hearts if I could have done any more.’  Lydia made a half-nod and half-shake of her head!  ‘Are you feeling any better now?’ he asked.  Momentarily, Lydia was not sure how to answer.  She did feel better but in a strange way did not want to feel better – how could she?  Her world had come to an end.  But then in a flash she knew why she had come.  She had a few issues she needed to talk about and only Dr Mark could understand and answer.  She nodded and sat up straight.  ‘I was numb at first,’ she said, ‘I could only just about survive but now I want to know what really happened.  What was wrong with Neil?  Why did he go so weak and frail even though he was eating?  I know what the death certificate says, at one time I was reading it every night, but what does it mean?  The day before he died he spoke to me so lucidly I thought he was going to get better but within hours he was unconscious and never spoke again.  Was it my fault?  What should I have done?’  Her questions tumbled out.  She was not even sure where some of them came from.  He explained.  They reminisced.  An incident came to mind when she was helping her husband to the bathroom.  She tripped and both ended in a heap on the floor.  Neil soiled himself.  She was angry and cried but when Neil hugged and kissed her they sat together in the mess laughing together.  She laughed as she wept, telling Dr Mark the story.  It was a long consultation.  ‘I do feel better now.  I have not laughed like that for months.  I will be back for my medical review,’ she said as she almost jauntily walked out.

So Lydia made a major step on the journey of integrating her grief.  The story, however, does not finish there for Lydia was not the only one who was grieving and needed to move on in the acceptance phase.  Dr Mark was also grieving but his journey was different.

The waiting room was getting restless.  Dr Mark was running 30 minutes late.  His last patient had gone but his door remained closed.  The receptionists looked at each other.  ‘His last patient was Lydia, you know, her husband died last year,’ one said.  ‘I will take him some tea,’ the other said.  She knocked and entered.  He turned to face his computer and his hand fumbled for the mouse.  She knew he was pretending to be busy.  She guessed he had been sitting staring at the wall.  She put the mug down, ‘This will help,’ she said, ‘the waiting room is restless, shall I rebook some?’  He shrugged then shook his shoulders as he brought his mind back to the present.  He looked at his appointment list.  ‘Wow!  How time flies!  Yes!  No!  Please apologise.  Say I have been held up.  If anyone cannot wait please rebook them.  Otherwise I will see everyone in turn.’  He went into consultation mode again and was back to normal.  Well, for then at least.  That evening, on his way home he diverted to the local park.  He pulled into his favourite viewing spot.  The sun was setting across the lake and he was vaguely aware of children playing and cyclists and dog walkers enjoying the last of the day.  He reflected on the morning’s consultation with Lydia and was pleased that he was able to help her on the journey of recovery into new beginnings after the grief over the loss of her husband.  But the experience had brought home to him with some surprise how much he himself had been upset at Neil’s death.  He had become close to Neil as he visited him frequently in the last few weeks of his life.  He knew he was terminally ill but losing a patient still hurt.  In the busyness of his professional life he had never talked about his own grief.  He had just suppressed it and pressed on.  His phone rang.  His wife wanted to know when he would be home.  He started the engine, and as he drove home decided he would tell his wife his part in Neil’s story.  It would be good to share it with her and at the next meeting with his colleagues he would again recount the experience for he was not the only one involved.  Neil had been well known and recounting his grief reaction might well help the rest of the team with theirs.

Reflect on these two stories.

How do they relate to your own experiences?

What parallels or contrasts have you noted?

It might help your reflection if you write down or dictate into your digital devise the story of the journey of grief that has come to mind as you have read these notes.  Writing or dictating your story extends your ability to recall memories and plays a significant role in helping you in the integration process.  Do not hurry through this task.  Take your time.

Is there anything else you need to do to move on in your journey of grief?